The first ICL of the season was last weekend and the Mendip gliding club have set the bar high for the next one. They had great weather sorted, great organisation in both launching and morning briefing and as we all know the most important thing of the weekend .... the BBQ. Oh and the flying was good ,a respectable pm start for the teams.

The gliders ranged from the trusty K6 up to the asw20's and ventus b's; a great spectacle and worth the trip just to see how it all works at other clubs.

Mendip is probably the most similar to Dartmoor gs and just as friendly.

As the team of one representing Dartmoor I felt the added pressure of putting in a good account. It helps to concentrate the mind with 1700ft low points and the sky going blue. However, best thing about flying in an ICL is everyone is so helpful you know you won't get left in a field on your own (as long as you leave the keys in your retrieve vehicle.)

I made it around ,but in rather slow time as I got stuck over Shepton mallet and had to 'park up' over the sunny picturesque town and wait for a thermal to break free.

Only one land out and a good day had by all.

Day 2- It was an even longer wait to get the thermals today. I launched at 2pm and the task had already been knocked back to the plan B task (task A was over 165km and very daunting with a late start and the promise of an early shut off)

I was here and rigged and although I had written the day off, why not give it a go? And what a great thing to do. I knew I had to go quicker just in case the forecast was right and the wether wind reaaly was that short so I tried to stick to all the tips you are given and read about.... and do you know some actually work!

So update on the results, (lesson one) , get the hang of the loggers/oudie before you set off on  task. My lack of technical knowledge appears to have cost Dartmoor points. I have found out I missed a turn point halfway through the 2nd task so my (what I thought was a great average speed) will now only be scored to that point and show as incomplete. Please use this lesson to get up to speed on your kit, (lesson 2) and  go a little bit deeper into the turn point just to be sure, it may cost you extra time but is better than the amount of points it cost me.

The good thing is I still had a fantastic time, and the points are a secondary thing in the ICL. Its all about the flights and smiles you get and helping each other.

Next ICL is Saturday 7th and Sunday 8th May. It's on our doorstep at Northill , what better chance to come and see what it's all about without traveling far. We still have a space if your a willing pilot wanting to give it ago (a first 50km flight was done at mendip while we were there last weekend)

If you are not quite ready for it but want to pop in for the day or the weekend please do. Never know if you get there sharp and get your name on the list you could also fly as we have a reciprocal arrangement with Northill

Hope to see you there
Richard Roberts 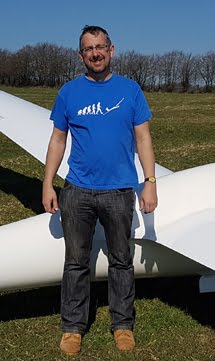